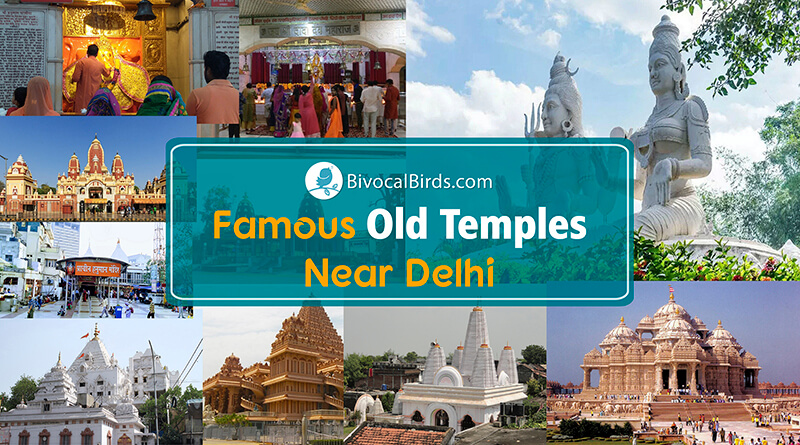 Delhi, India's capital, has long been known for its extravagant culture. It's lively, jolly, and fills your heart with joy. The city is home to some of India's most well-known tourist attractions, heritage sites, and nightlife hotspots, making Delhi a one-of-a-kind destination. Not to mention that the city's delectable street food increases the enjoyment of your vacation by leaps and bounds. While tourist attractions such as Connaught Place, President's Estate, Chandini Chowk, Old Delhi, and so on are well-known, the city also has some of the best temples in Delhi that are a must-see on your Delhi Darshan.

It's not just the spiritual aura that the temple exudes; it's also the breathtaking structure's magnificent beauty and intriguing storey. India is a land of culture and spiritual dhams that attracts visitors from all over the world. Delhi has been one of the ideal places in terms of spirituality and divinity with the expression of the best architecture. The city is home to numerous temples, and visiting each one would take a month, believe us!

So, to make your job easier and your vacation more enjoyable, here are the 9 temples you must visit during your Delhi tour.

The Akshardham Temple in Delhi, one of the most famous Hindu temples and a magnificent spiritual-cultural complex, is listed in the Guinness Book of World Records as the World's Largest Comprehensive Hindu Temples. The temple, dedicated to Lord Swaminarayan, is known for its impressive and grandiose structure and has eight beautifully carved mandapams with scripts from Hindu teachings and devotional traditions carved into the temple walls. Because it is dedicated to Lord Swaminarayan, the temple is also known as the Temple of Swaminarayan Akshardham in Delhi. The Akshardham complex in Delhi houses India's largest stepwell, which hosts the most awe-inspiring water show for visitors. In addition, there is an open garden, Narayan Sarovar, and various expeditions and rituals that make a visit to this temple worthwhile.

Note: There are a few things you should keep in mind while wandering around the temple complex, such as NO photography, videography, and so on.

It is a Vaishnav temple dedicated to Lord Krishna and Radharani. It is also termed as Hare rama hare Krishna. Achyut Kavinde founded the temple in 1998, and it is located in the Krishna Hills to the east of Kailash in Delhi. The temple is exquisitely designed, with intricate carvings and stonework, as well as a lovely fountain within the complex. The idols of Lord Krishna and Radharani are dressed in opulent attire and stunning jewellery, which astounds visitors at first glance. The ISKCON temple in Delhi is also a centre of Vedic Sciences, and devotional lectures are held for devotees to help them unwind from the stresses of daily life. The temple's central hall echoes the divine tune "Hare Rama Hare Krishna," and the complex also includes a museum that hosts multimedia shows based on epics such as the Mahabharata and Ramayana.

Lotus Temple, one of Delhi's most well-known temples, is dedicated to the Baha'i faith. It is built in the shape of a lotus and is one of the world's most popular tourist destinations. Fariborz Sahba, a Canadian architect, designed and built the Lotus Temple, which was completed in 1986. The temple is open to everyone, regardless of caste or creed, and is one of the world's seven Baha'i Houses of Worship. The entrance of the temple’s gate is extremely enchanting, and complemented with floral designs. The temple complex's tranquillity makes it one of the most divine and attractive temple complexes in the city. The calmness driven by the structure of the temple make it the most divine and attractive temple.

If you are in Delhi, you must go to the famous Bangla Sahib. The Gurudwara, located on Baba Kharak Singh Marg in Connaught Place, is the home of the eighth Sikh Guru – Guru Har Krishan – and contains a holy river known as the "Sarovar" within the complex. Before it became a Gurudwara, Bangla Sahib was a bungalow owned by the 17th-century Indian ruler Raja Jai Singh. It was known as the Jaisinghpura Palace back then, and Guru Har Krishan is said to have taken residence here in 1664, during the country's smallpox and cholera pandemic. Guru Har Krishan assisted in the treatment of the sick, but he soon became ill himself. The Bangla Sahib Gurudwara is extremely important to the Sikh community, and anyone visiting Delhi must pay a visit to the Gurudwara. Because the Gurudwara is in the

This famous Delhi Mandir, dedicated to Laxminarayan, is located in Connaught Place and was built by the Birla family. The temple is commonly referred to as the Birla Mandir, but you may also hear locals refer to it as the Laxminarayan temple. It was built in the early 1900s and spans 7.5 acres, housing many shrines, gardens, fountains, and beautiful sculptures and carvings. The main idol is of Lord Narayan and Goddess Laxmi, but it also has shrines dedicated to Lord Ganesha, Shiva, Hanuman, and other deities. Birla Mandir is one of the most well-known temples in Delhi, attracting visitors from all over the world.

The Kalka Mandir, also known as the Kalkaji Temple, is one of Delhi's most well-known temples dedicated to the mighty Goddess Kali. It is located in the city's southern outskirts. Maa Kali is known to represent power and is regarded as a fiery goddess who destroys evil. Maa Kali is said to have been born in the same place as the Kalka Mandir, and Lord Krishna and the Pandavas worshipped her at the same temple during the Mahabharata. The Kalkaji Temple receives the most visitors during the nine nights of Navratri, and the celebrations are filled with fervour and grandeur. Devotees bathe Maa Kali's idol in milk, after which a grand tantric Aarti is performed in the morning and evening.

The Chattarpur Temple, located in South Delhi's most affluent neighbourhood, is dedicated to Goddess Katyayani, who is considered to be a part of Navadurga. This Delhi Mandir, founded in 1974 by Baba Sant Nagpal Ji, is India's second largest temple complex after the Akshardham Temple. The temple is well-known for its magnificent lattice screen work (jaali design), and it also houses smaller complexes for other deities such as Maa Mahishasurmardini, Ram-Darbar, Radha-Krishna, Shiv-Parvati, Laxmiji, Ganeshji, Hanumanji, and so on. The lavish 'Shayya Kaksh,' which serves as the presiding goddess's resting place, is the Chattarpur Mandir's main attraction.

It is a 108-foot-tall colossal idol of Lord Hanuman that towers over the entire city and is located above the Karol Bagh and Jhandewalan Metro Stations. The massive statue that the temple houses is one of the most famous attractions, and it has been featured in many movies and Indian television shows set in New Delhi. Aside from the statue, another highlight of the temple is the dramatic entrance, which is designed to resemble the mouth of a slaughtered demon. The temple was constructed in 1997 and includes a small shrine dedicated to Maa Kali. Aside from Jhandewalan, there is another Hanuman Mandir in Delhi's Connaught Place that is visited by devotees every Tuesday.

It is another temple that you cannot miss out being in Delhi. The Nili Chhatri temple, located at the Nigambodh Ghat on the banks of the famous River Yamuna, is a 5300-year-old temple that is said to have been built by the oldest Pandava, Yudhistir. It is said that a horse sacrifice, Ashwamedha, was performed in the temple, followed by a Vedic recitation. The name Nili Chhatri literally translates to "Blue Umbrella," and it is so named because of the temple's massive blue dome. Lord Shiva resides beneath this dome, and on auspicious days such as Mahashivratri, Basant Panchami, and Shravana, people from all over the country come to pray for wealth, good health, and happiness.Other than these, the Jagannath temple in Delhi, the famous Kali Baari, Other temples in Delhi that you should not miss include the Shani Dham Temple and others. Make your next trip to Delhi spiritual!