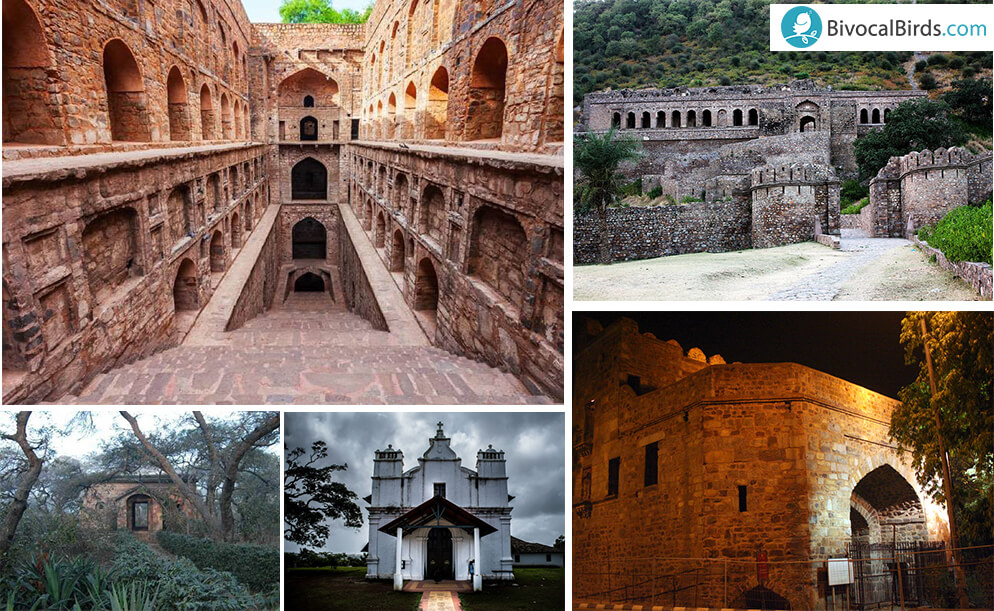 The urge to discover more about the unknown has driven people to travel to the four corners of the world for ages. While some individuals like researching haunted sites, others prefer to stay away from them. India, the land of tens of thousands of untold stories, has plenty of strange places to see.

We have made a list of some creepy places:

Let's go through the haunted places one by one:

There is no clear record of when or by whom the majestic Agrasen ki Baoli was constructed. However, many historians believe that it was carved during the Mahabharata period by none other than Maharaja Agrasen, the fabled ruler of Agroha.

Today, Argasen ki Baoli or Ugrasen ki Baoli is one of those tourist places in Delhi that blend history, architecture, beauteousness, and even a thrill of paranormal activities.

It is shrouded in mystery as no one knows who built this step well. This stepwell has a strange architecture as it is 60 m in length and 15 m wide, which makes it very narrow.

Earlier, this stepwell was filled with black water that is completely dried up today. Some legends say that many people who had visited the place were often led to the water and they felt like they were drowning in it as if the water was calling them out to get submerged in it.

Also, there have been some reports of suicides here in the past.

This is not just a ‘Darwaza’ or a gateway, but a small burg in itself. Located opposite the Ferozeshah Kotla ruins, It measures 15.5 meters high. It is built of quartzite stone and has three staircases that lead to various levels of the gate.

During the Mughal period, it was given the name "Khooni Darwaza." That is because the two sons of Abdur Rahim Khan-i-Khanan, a minister in his father Akbar's court, were murdered and hanged on this gate by emperor Jahangir.

Many people consider this place haunted. If you have ever visited this place, you will hear stories that during monsoon, you can see blood dripping from the ceiling of this gate. Just imagine this sight!

However, according to a scientific explanation, the blood-colored liquid is actually the rust on the joints of the gate that drips during the rainy season when it comes in contact with water, giving it a reddish colour that people mistake for blood.

It's not surprising to find this location on the list of India's most haunted locations, is it? The Ridge is one of the frightening places in Delhi, according to some eyewitnesses. People have seen the ghost of a Colonial-era British man holding a rifle hovering in the area.

As far as Delhi is concerned, most of these places are antediluvian monuments with a lethal past or derelict space that are rumored to have been hosts to creepy activities.

Bhangarh, popularly recognized as India's Most Haunted Place, was once a thriving historical town. Bhangarh Fort was once a marvel of beauty and strength, built by Madho Singh, one of Emperor Akbar's nine ratnas, for his son Man Singh I, in the 17th century. Before it was supposedly deserted overnight, Bhangarh was said to be home to around 10,000 people.

The majority of people believe that Bhangarh Fort is haunted, and there are several legends that fuel the mysteries surrounding of Bhangarh. Entering the fort after sunset is considered a daring act because it is said to be a hotspot for paranormal activities. As a result, the Archaeological Survey of India has restricted visitors from visiting the Bhangarh Fort at night. ​

The 3 Kings Chapel is a lone church perched on top of Cuelim Hill near Cansaulim, in South Goa's wide expanses.

The plot revolves around three 'power-hungry' kings who aspired to rule this land. They were so focused on acquiring the land that they caused unrest in the area.

King Holger Alvunger devised a great scheme to undermine the other competitors one beautiful day.

Many people say that the site is haunted, and the spirits of the kings still wander over the church. ​

No one escapes from life alive

Believe it or not, India has more haunted locations than you may imagine. So put on your ghostbusters gear and explore any of these locations around the country while the moon is shining and black cats stalk the shadows.

You need some real-life thrills if you're the kind who doesn't find horror flicks satisfying enough: You may have watched everything from The Exorcist to The Conjuring, but cheap jump-scare movies will never fulfill your desire for the supernatural. Believe it or not, India has more haunted locations than you may realize.